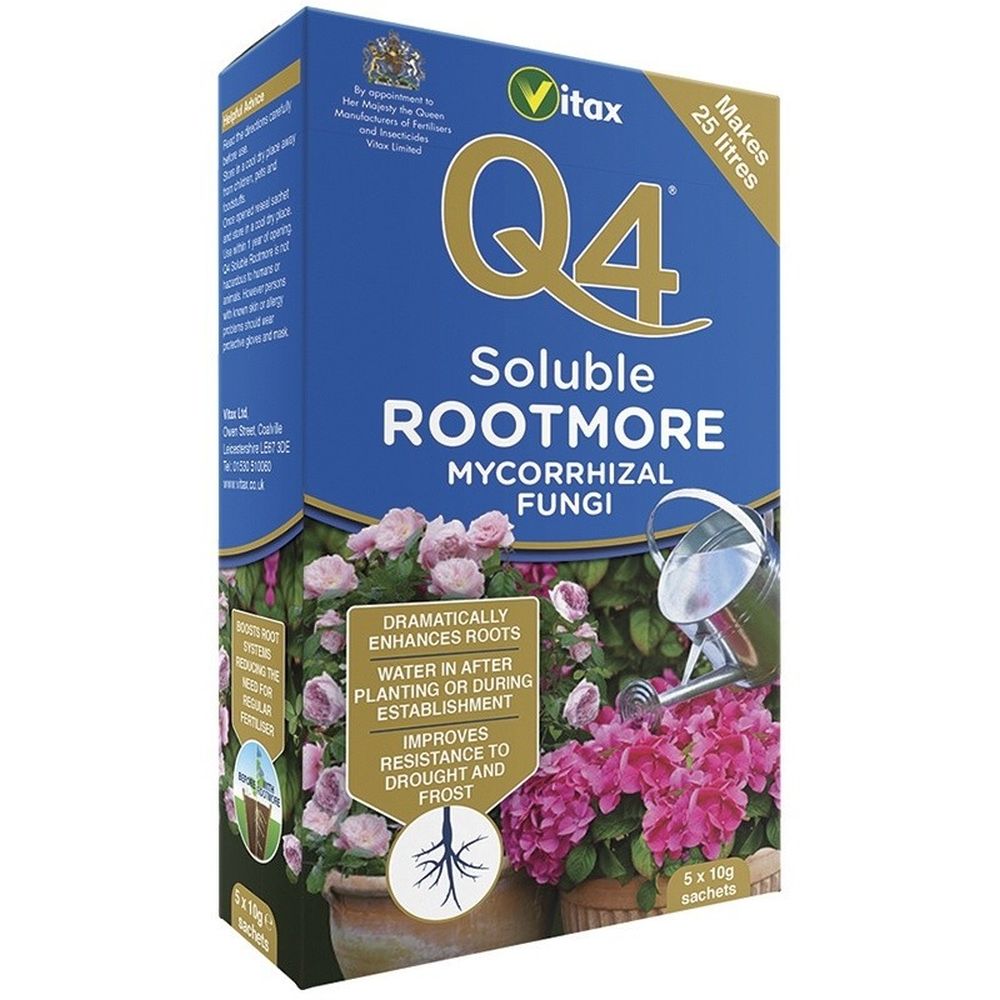 A blend of mycorrhizal fungi, beneficial bacteria, seaweed and biostimulants, Q4 Rootmore Soluble has all the benefits of Q4 Rootmore, but in a soluble format.

Unlike Q4 Rootmore, Q4 Rootmore Soluble can be watered in both before and/or during establishment. It also helps improve resistance to drought and frost in those early spring months.

Results are not immediate, but evident as time passes especially during the warmer months.

Non-hazardous, Q4 Rootmore Soluble is safe to use around children and animals. Always read the label carefully before handling and store in a dry, safe area.

Due to the Coronvirus situation we are currently only able to deliver the the Isle Of Wight.

Click and collect is currently unavailable, only Island deliveries

Deliveries can only be made to kerbside/ front garden, no customer signing needed we will take a photo as a proof of delivery.

Demand for Island deliveries is high so please bare with us, while we endeavour to get your delivery to you on our set area days but this will not always be possible and we will keep you informed of any changes to your order.

Thank you for your patience

Helping to keep the Island gardening.

All goods will be sent either by Recorded Delivery (Royal Mail) or Courier.

Please inspect your delivery from our partner Courier. If your outer package is damaged please do not accept the goods.

On acceptance of your goods, if you find them faulty then please contact the online team to explain the problem. The online team can be contacted by email (online@busybeegardencentre.com) or telephone 01983 811096 ext 6. We endeavour to do our best to rectify your issue but sometimes we will need to have the goods returned to us.

We ask that you pack the goods the same way that they arrived and that all parts and manuals are included.

Assuming, on receipt of the goods, we find the fault is genuine we will offer a refund or replace the goods and send them back to you at no cost to you.

If on receipt of the online goods we find no issue or damage to the item then you will be charged the full return costs of the goods (if you requested a courier).

If you change your mind and do not wish to keep the goods then you have 21 days to return them to us for a full refund.

Once we have agreed to refund you either all or part of your order, you will receive an email from Busy Bee Garden Centre headed “Your Returns”. This will contain information on which goods we have refunded. If we are refunding your delivery costs, you will receive a second email from our online team confirming this.

All Refunds will be returned on the card you used for payment of the goods. Please allow 3 working days for the refund to reach your bank account.

Parcels returned to us undelivered or refused are charged at £10 to help cover the Courier charge, any additional distance charges may also be added. This is not charged on agreed returns.

Happy with your product?